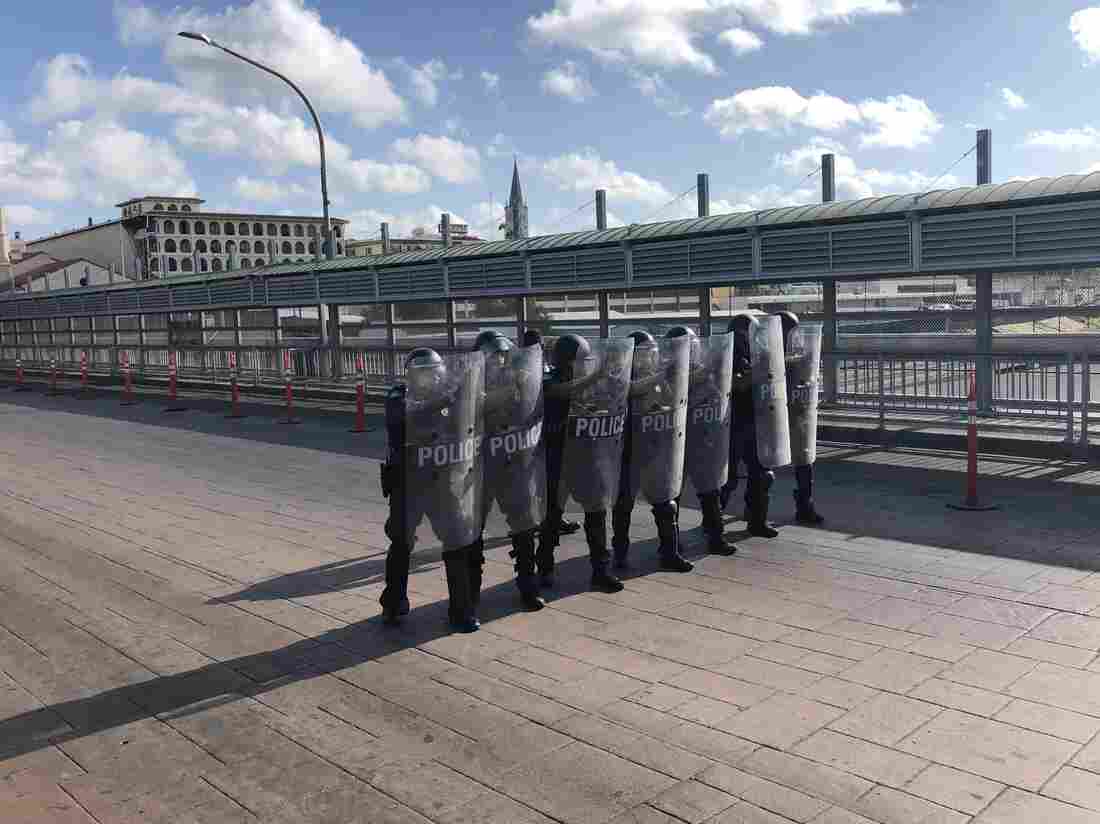 A special response team with Customs and Border Protection drills on the international bridge between Laredo, Texas, and Nuevo Laredo, Mexico, in the event that desperate migrants rush the port of entry.

One day last week in Nuevo Laredo, Mexico, a fearsome gun battle broke out on the main boulevard to the airport, as drivers careened off the thoroughfare in terror while rival narcos blasted away at each other.

The Cartel of the Northeast operates with impunity here, cruising around town in armored, olive-drab pickups with Tropas del Infierno, Spanish for “Soldiers from Hell,” emblazoned on the doors.

And a pastor named Aaron Mendez remains missing after being kidnapped from the Love Migrant House, a shelter he operated. One news report says extortionists grabbed Mendez when he refused to turn over Cuban migrants they wanted to shake down.

This is where the U.S. is sending migrants who have asked for asylum after crossing the Rio Grande near Laredo, Texas.

More than 30,000 migrants have been sent back to Mexican border cities to await their day in U.S. immigration court under the “remain in Mexico” program. They are sent back from U.S. ports of entry and given a date — generally from two to four months in the future — to return and make their case for asylum before an immigration judge on a video link. About 4,500 of them have been sent to Nuevo Laredo, where mayhem is rampant and extorting migrants has become the cartel’s latest income stream.

The program is officially known as the Migrant Protection Protocols, or MPP. In Spanish, the acronym is PPM.

“For me, it’s P-M-M, or Plan of Lies to Migrants,” says Father Julio Lopez, director of the Nazareth Migrant House. “Because there is no protection.”

Lopez is anxious these days. He won’t talk about organized crime in his city — it’s too risky. But he has plenty to say about MPP. He’s seen firsthand the asylum-seekers who cower in fear in the city’s six shelters, including his own, leaving only briefly to buy food.

Mexico’s National Immigration Institute has been providing migrants with free bus trips to Monterrey, 2½ hours away, and Tapachula, 36 hours away, to get them out of crime-ridden Nuevo Laredo. 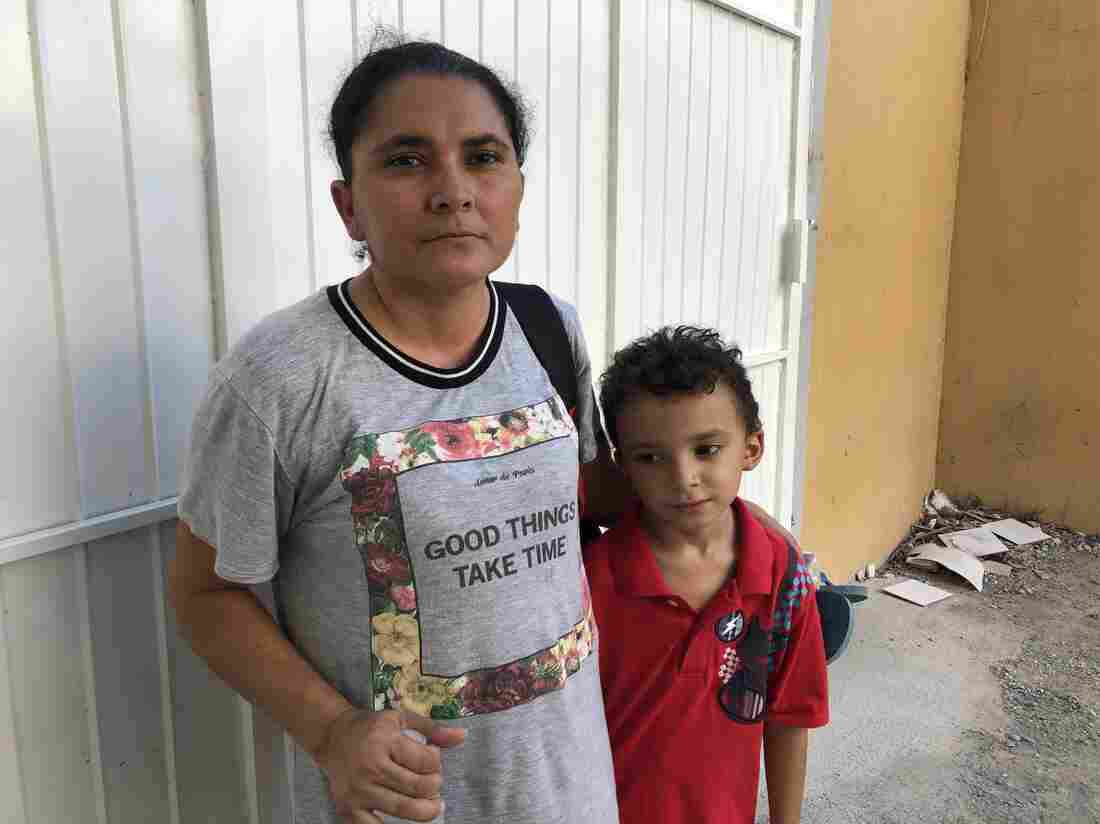 Liceth and Leytan Morales, asylum-seekers from Honduras, have decided to return home after they were kidnapped for three weeks in Nuevo Laredo and their family in Texas paid $8,000 ransom for their freedom.

But even that may not be safe. According to a witness account, several pickups full of mafiosos recently screeched to a stop in front of a government-contracted bus that had just left the central bus station. They ordered a dozen migrants off the bus, ordered them into their vehicles, and drove off, leaving the rest of the passengers shocked and frantic.

Cesar Antunes was on an earlier bus that departed, just before the bus that was ambushed. Antunes said he learned what happened to the second bus when both buses arrived in Monterrey and he spoke with one of the remaining passengers who witnessed the abductions. Antunes related the terrifying tale to NPR on his mobile phone from a city in Northern Mexico.

“Nuevo Laredo is more dangerous than San Pedro Sula, Honduras,” Antunes says, “which is where I fled from.”

The Mexican government has been cooperating with Trump’s immigration agenda after the president threatened that country with steep tariffs in June. In addition to accepting migrants returned under MPP, Mexico has deployed security forces to its own borders to block migrants from going north.

Acting Commissioner of Customs and Border Protection Mark Morgan called Mexico’s help “a game changer.” As a result, the number of migrants in U.S. Border Patrol custody has dropped dramatically in the past two months.

Yet Morgan says he was unaware asylum-seekers waiting in Mexico are being disappeared and extorted by gangsters.

“I haven’t heard anything like that,” he said in a recent roundtable with reporters, “not with respect to the MPP program.”

The CBP chief may be getting his misinformation from Mexican officials. The chief investigator for the Office for Disappeared Persons in Nuevo Laredo, Edwin Aceves Garcia, said in an interview: “We have received no reports of kidnappings and extortion of migrants. Those are just rumors. You can’t believe everything those people say.”

As for the case of Aaron Mendez, the kidnapped pastor, a spokesman for the state prosecutor’s office in Ciudad Victoria said he remains missing and the investigation continues.

With the brazen crimes committed against migrants stuck in Nuevo Laredo, some of them are abandoning their asylum requests and returning home.

The 40-year-old Honduran woman fled the city of Choluteca with her 6-year-old son, Leytan, when thugs repeatedly robbed her small store. Then, as she tells it, when they arrived at the Nuevo Laredo bus station last month, young men with tattoos and ball caps grabbed her and her son and held them prisoner for three weeks in a succession of safe houses. Ultimately, she says, her family in San Antonio paid $8,000 in ransom for her freedom.

“When they released us, we immediately crossed the bridge to the U.S. to ask for asylum,” she says. “But they sent me right back over here.”

Contemplating a two-month wait in this treacherous border city for her court hearing in Laredo, Liceth and Leytan Morales decided to go back to Choluteca via the free daily bus to southern Mexico.

Lopez, the shelter operator, says most of the other migrants in his shelter are choosing to do the same — return home. The Mexican government points to crime and violence in Nuevo Laredo as a reason for migrants to consider leaving.

Lopez and others said they believe the bus trips to Tapachula, a city near the Mexico-Guatemala border, are a transparent attempt by Mexican authorities to persuade migrants to return to their homes in Central America.

Crime in Nuevo Laredo “is the perfect excuse to get rid of them because the government doesn’t want them here,” said the priest.

VATICAN CITY – Pope Francis has donated 500,000 dollars to help migrants in Mexico, offering assistance to local projects that provide food, lodging and basic necessities. The funds, from the Peter’s Pence collections, will be […]

Should you travel this summer to Mexico amid safety, algae and political concerns? – USA TODAY

CLOSE An invasion of a thick and stinky seaweed, Sargassum, is covering the beaches of the Caribbean paradise of Mexico’s Tulum. Newslook The travel and tourism industry is a major economic driver for the Mexican […]